What a day!!! It’s the day that we set sail on Ambition! Breakfast was at 9:30am and after that it was all go, go, go.
We got to try out the X-12 Triad simulators, an experimental aircraft that’s being tested and used on Ambition. We flew around Pensacola practicing formation flying, takeoff and landing on an aircraft carrier. Meanwhile four of us Irish AXPs got chosen to get interviewed by a big local television company to talk about our experience of America and the National Flight Academy so far. It was aired on prime time news and a link will be put up soon!
AXPs from all over America boarded all morning. There are an impressive 108 AXPs in total on board Ambition which is the most that the National Flight Academy has had this summer.
At 14:00 after a huge lunch, we set sail. One of the first things we did was break up into our different squadrons (a group of twelve AXPs) and meet our chiefs. After meeting everybody and introducing ourselves we sat down in the ready room where we were taught about the theory of flight by Operations Officer O’Rear who is of Irish descent. We each paired off with a flying partner and then it was time to go back to the hanger and fly some more! We had a few small exercises to fly that helped us get used to the controls and also we learnt about the different roles of the pilot and co-pilot. We had great fun and I don’t think we had any major crashes! But before we knew it, it was time to land our aircraft, shut down the engines and head up to the Joint Intelligence Center. The JIC is where all our missions are planned and prepared before we fly. Today we were taught how to create a flight plan and how to make the necessary calculations. Then we were taken to the Joint Operations Center (JOC) the room where all the communications and air traffic control operates from. We learnt how to use the radar and what to say on the radio to make sure that there are no collisions in the air.
After a quick dinner we were back in the aircraft or in the JOC for even more practice to fine tune our aviation skills and to experiment with the capabilities of the aircraft. At 21:00 we finished up and we spent time with our squadron making up our callsigns which is what we will be called for the rest of the week. We had a good laugh trying to get the right names for everyone. Even the chiefs had to get one.
It has been a exciting and eventful day aboard Ambition and with all our flying for the first time, using the radios, meeting new people and making new friends we are all truly wrecked so it’s time to get some rest and refresh ourselves for the early 06:30 start tomorrow!
So it’s goodnight from Ambition!
Eoin Shimizu. 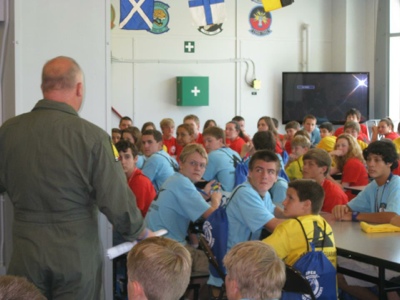 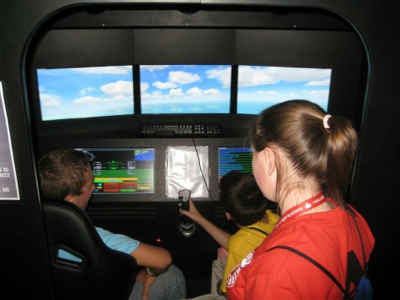 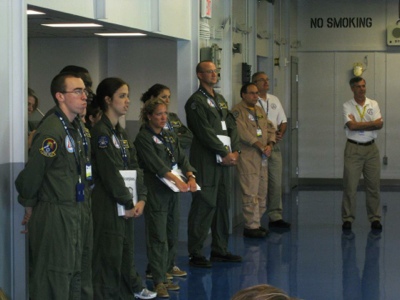 Chiefs in the Mess Deck waiting to greet their squadrons 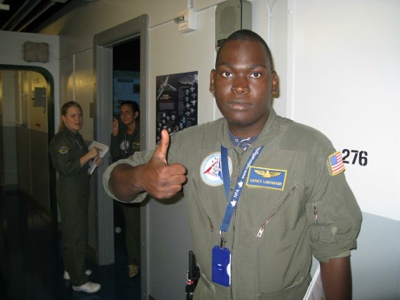 Chief Lonex says “Everything is A-Ok on Ambition today”.

This entry was posted on August 6, 2012 by aviatorofthefuture. It was filed under NFA, Uncategorized and was tagged with NFA.

The National Flight AcademyJuly 26, 2013
We have arrived in Pensacola!