Ambassadors make it to 4 days!!

Today marked the AXPs 4th day aboard the USS Ambition. It was also our second last full day before graduation and was a very exciting and eventful day which was obviously to the AXP’s delight. Our day started as usual with the daily morning call at 0630, which some of us still haven’t gotten used to, and our breakfast on the Mess Deck with the other squadrons.

Following breakfast each squadron had squadron time where we talked with our chiefs and discussed some basics of skills of land survival. This subject was further discussed in detail when we went to the Land Survival Centre on the naval base in Pensacola. Here, Master Chief Curley explained to us about the various requirements we should adhere to in the misfortunate situation of finding ourselves deserted! He also showed us how to light fires in the wild and find water. It was so much more complex than I thought!!

After this trip to the Land Survival centre we returned to base on Ambition. Unfortunately the bus on the way home did not have air-conditioning! When we arrived back onboard the Ambition we crossed the gangway where we met Kate, Paddy and Maeve. We had a short “catch up” before we left again.

This time we went to a class on the importance of the weather to aviation. We had meteorologist John O’Hara brief us about this. We also predicted what tomorrows’s weather will be like. The team who got it right got to eat first at lunch so the pressure was on! After that we went to the JIC where we planned the Eglin fly-by mission with IO Wilson before lunch.

It was time for another off-shore trip after lunch, this time it was to the Blue Angel’s hangar on base. This was such an amazing experience. Here we met with all of the crew in the world renowned Blue Angel’s squadron. We met with everyone from the engineers to the administration team and even saw a few pilots!! At the end of the tour we got the chance to come face to face with the F-18 jets. It was amazing to see them all at work!

We resumed our usual positions after that on ambition, flying the Triads, planning missions and working in ATC. At first we were controlling the Argonauts in the JOC before we took the reigns ourselves in the triads!! This mission was one of our toughest missions to date. It involved flying in formation, and not just normally!! We did it in front of cameras! However in the end the Maces came out on top!

We got up from dinner and immediately headed for the JIC where we planned one of our last missions, a cross country flight to anywhere within 500 miles of Ambition! Our next task was to control and fly another mission, the Tampa air rally! This was a competition between all squadrons and we are currently awaiting results!!

It was then time for freetime!! AXPs could then play a game of air hockey or stay in their staterooms before lights out at 2300!! 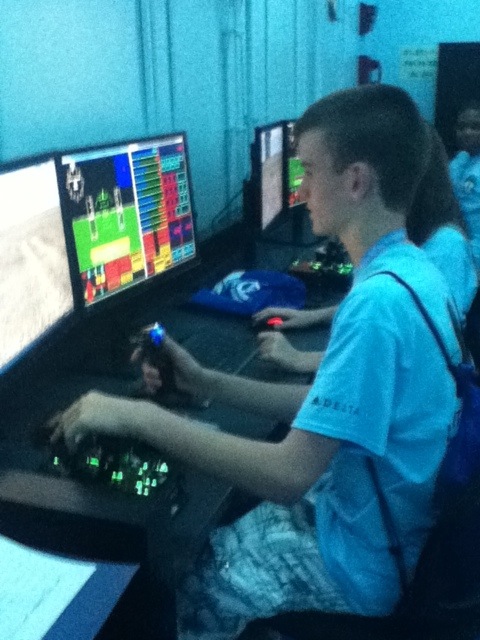 This entry was posted on August 1, 2013 by aviatorofthefuture. It was filed under Uncategorized .

Error: Twitter did not respond. Please wait a few minutes and refresh this page.